EGYPT’S HEART OF HISTORY AND CULTURE 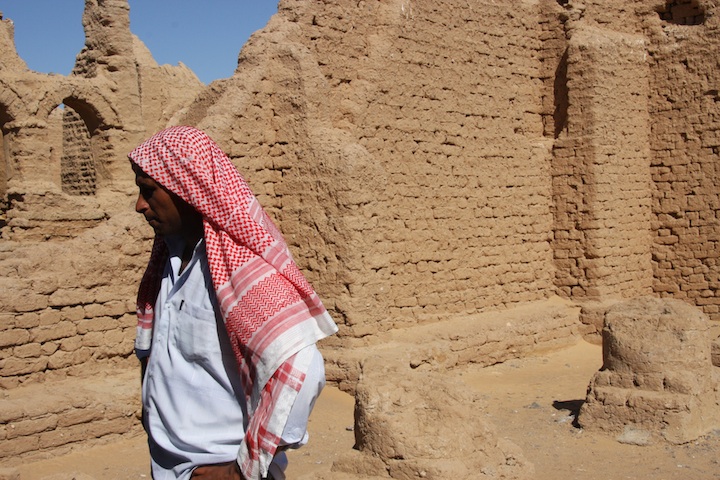 Words by Mirella Sborgia and photos by Teresa Carrubba

The  start of our journey into the history and culture of Egypt began at its heart: the Nile. The majestic river that flows through black and Mediterranean Africa, and whose periodic floods guaranteed not only man’s survival despite the arid region around it, but was also the backdrop to one of the world’ most important civilizations. We left Aswan on the luxurious    May Fair which was launched a couple of years ago, before the crisis which hit tourism in Egypt after the political unrest earlier this year. Today tourism professionals say that  while Italian visitors have returned to the Red Sea they are still not confident enough to visit the archaeological sites along the Nile. 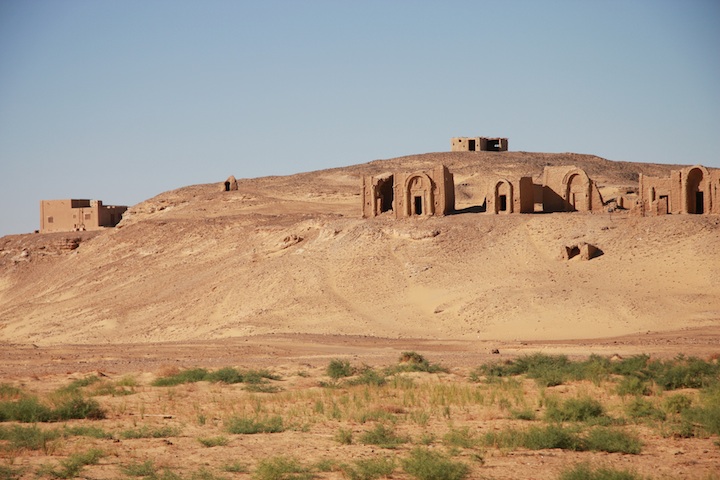 Aswan, which is Egypt’s southern-most city, is a frontier between two worlds: the “civilized” and known world and the other, impenetrable and distant world. Because being an Arab and a Mediterranean country Egypt can also boast the culture and traditions of Nubia, the region where its proud, dark-skinned and athletic inhabitants resisted any form of domination for centuries.  To the point of almost disappearing, together with their homeland, in the Sixties when the region was flooded by the waters of the man-made Lake Nasser after the construction of the Aswan Dam. And in order to save Nubia’s archaeological sites and temples from the advancing waters UNESCO mounted a major operation to dismantle and transport Nubia’s immense historical and artistic heritage to higher ground.

One of the temples that were saved is the Temple of Philae which was moved to the island of Akilkia, a few kilometres from Aswan, between the two dams.  We take one of the small motorboats that ply their way to and from Shella to the island.  The temple is consecrated to Isis, the goddess of maternity and fertility, and in ancient times the temple was a popular place of pilgrimage, reaching the height of its glory during the Greek-Roman period. 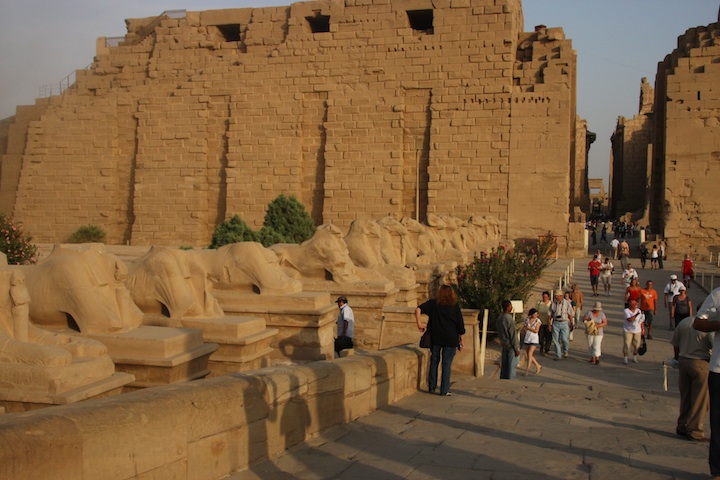 We continue our river journey into history and the morning sun turns the waters of the Nile into gold like the river banks where, for centuries, Egyptian farmers cultivated their crops.  Having left Aswan the boat begins its slow ascent of the great river along which, since time immemorial, boats laden with people and goods have passed.

Luxor, our next stop, is two hundred miles further north, towards the coast.  Our boat ascends the Nile, stopping where history has left traces of its passage, like the Temple of Kom Ombo which is on a small hill overlooking the river and from which, in ancient times, it was possible to control both the river and land traffic going to and from Nubia. It is the only temple in Egypt consecrated to two gods:  the God Sobek who has a crocodile’s head, and the God Haroeri who has the face of a falcon. 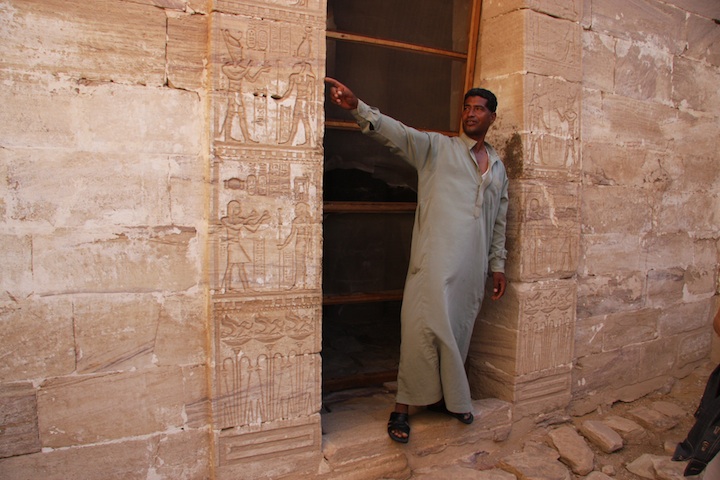 Edfu, which appears on a wide bend of the sacred river, is strikingly beautiful.  Scores of little horse-drawn carts await the tourists who descend from the boats.  We take one to across Edfu which, as well as attracting visitors to its temple, is also a bustling city that produces sugar and has a famous factory, known since ancient days for its ceramics. Edfu’s temple is consecrated to the falcon God Horus. Hidden and majestic temples and cities have existed for centuries along the river, with the cities of the living on the eastern side of the Nile and the cities of the dead usually on the western bank.

The cruise continues to Esna, which was once one of the most important cities in Upper Egypt (Tasenet) and also one of the most important centres of the Copt religion.  The city is linked to the river bank by an important dam which blocks the river, the result being that all craft having to queue to get into the lock and overcome the difference in the water level. Apart from enjoying the landscape it is  interesting to watch the little boats carrying locals who, during the wait to get into the lock, take advantage of the situation by literally flinging clothing, carpets and brightly coloured tablecloths at the tourists. Later that evening we come to some sixty splendid royal tombs dating back to dynasties from 1570 to 1200 B.C. Among the most important the tombs of the great pharaohs Ramses IV, Seti and Tutankhamun. 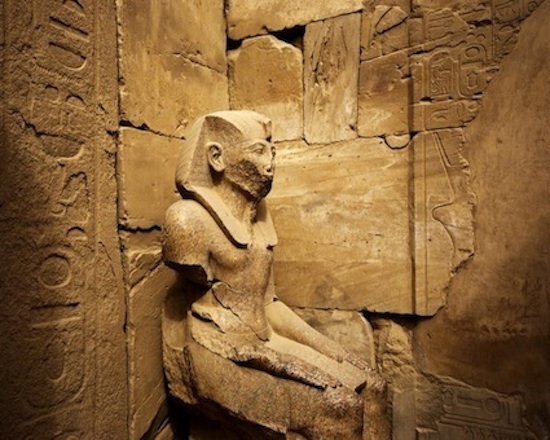 On the eastern bank of ancient Thebes, that is to say the “city of the living,” stand two monumental temples consecrated to the God Amon, the most important being the temples of Karnak. These are reached along a long avenue flanked by a double row of sphinxes with ram’s heads which once lead to the port.  And it is not difficult to imagine the long ritual processions that wound their way along the three and a half kilometres of this avenue of sphinxes up to the Temple of Luxor in celebration of the annual floods.  Waiting for the Egyptian revellers then, as for us today, are the colossal statues of this majestic and striking complex of temples.  Next to them, the  soaring 25-metre pink granite obelisk of Aswan, the twin of which was given to France in 1831. 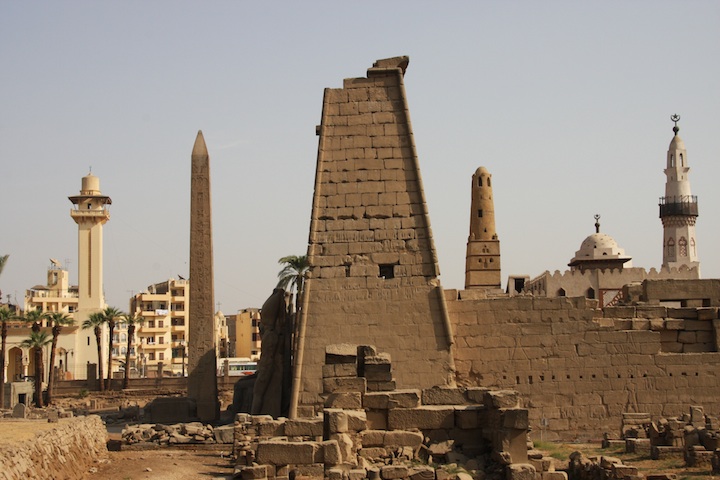 Our journey along the Nile on the comfortable May Fair ends as, from Luxor, we will continue by coach towards the New Valley. This region, a new frontier of tourism in Egypt, has a lunar landscape with golden dunes and rocky planes which contrast with the lush vegetation we have seen up to now along the Nile.  This is an area which not many international tourists are lucky enough to discover, although it is very beautiful and has well-preserved landscapes and traditions.  Along the  way we come to the oases of Farafra, Dakhla and Kharga, green islands in the New Valley’s sea of sand.  We visited Kharga which is undoubtedly the largest and most developed of these oases, and is also the capital of the Valley which is  ruled by a governor. For centuries Kharga was an obligatory stop for the Egyptian and Roman caravans coming from Sudan and the Roman fortresses and ancient temples we can see today are tangible proof of its history.

There are two exceptional excursions to take from Kharga: the Temple of Ibis, consecrated to the  Theban God Amun (the only major evidence the Persians left in Egypt) and the Copt necropolis of Al Bagawat, dating back to the time of Nestorius, and consisting of 263 brick tombs in the peculiar shape imposed by  this Christian religion. 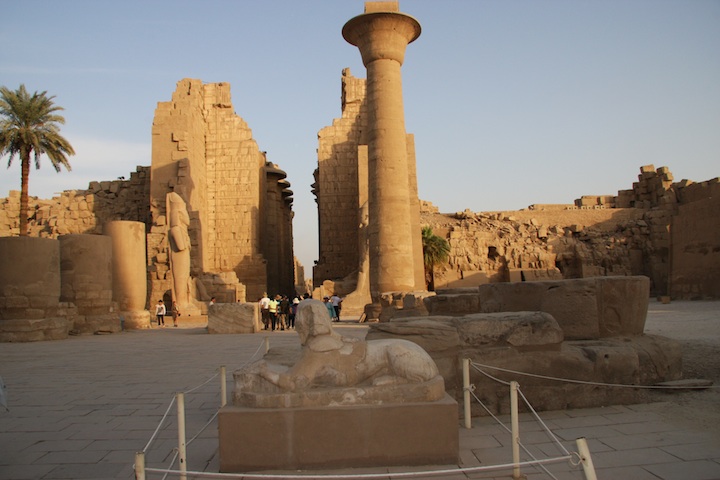 In Dush we stayed at the Tabuna Camp, a luxury tented camp and enjoyed our night in a desert tent. The camp, which is a “Desert in Style”  idea, is surrounded by the desert and located close to two important archaeological sites which are a little off the beaten tourist track: the ruins of the Roman Qasr El Dush fortress dating back to the 1st century A.D. and the ancient temple consecrated to Isis and to Serapis, which was erected by Domitian. 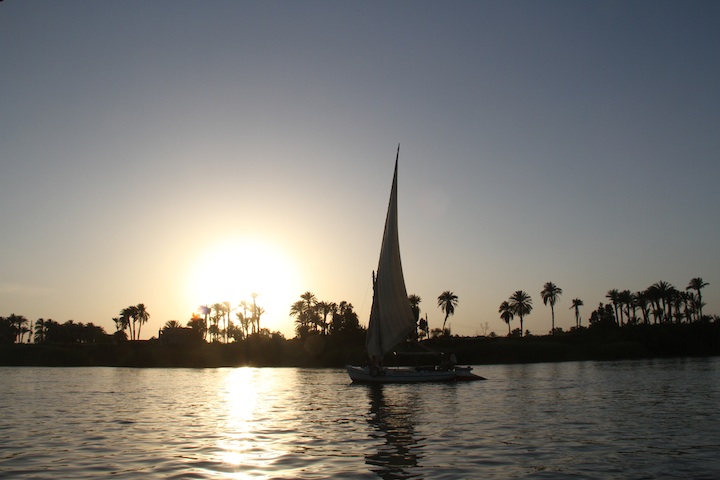 Our journey ends in Cairo with a visit to the Egyptian Museum and the famous pyramids of Giza. In the chaotic metropolis the silence of the desert and the journey along the placid waters of the Nile are a distant memory – blurred images of another era.  This era being one of new challenges for Egypt.  And for travellers and tourists there is the real possibility of safely visiting the many wonders of ancient Egypt.

Egitto nel cuore (Egypt in your heart) is the clever slogan of the three tourist promotional organizations in Italy -– Turismo Egitto, Egyptair and MISR Travel – to bring Italian tourists back to discover the cultural wonders of the Land of the Pharaohs. 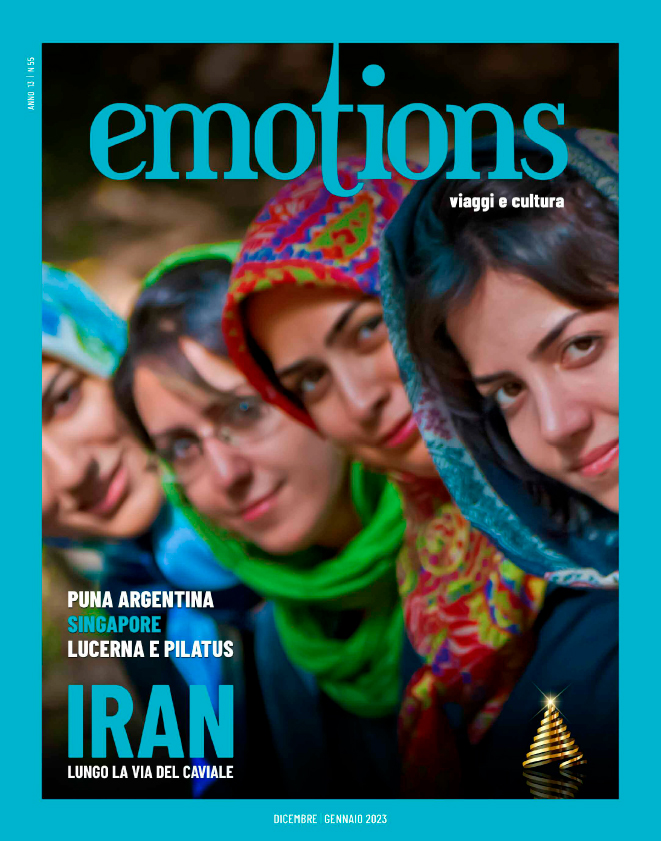